Taking the Word to the Streets 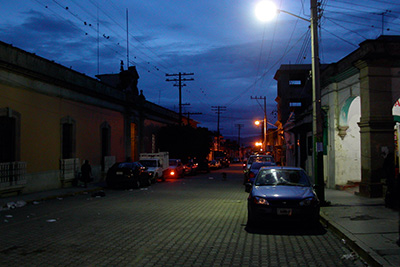 Silverio was only 9 years old when his family fled the civil war that was ravaging their Central American country. The traumatic effects of war, coupled with poverty and the lack of opportunities, propelled them to make the long and dangerous trek northward to California.

Silverio’s parents soon found work and poured themselves into their jobs, barely putting enough food on the table for their large family. But there were also disappointments because, rather than taking advantage of educational opportunities, Silverio gradually slipped deeper and deeper into the grip of a gang.

The camaraderie and sense of community of the gang gradually replaced his home-life and the stability his parents were trying so hard to provide. It wasn’t long before Silverio “passed all the tests,” became a full-fledged member, and was helping his gang protect its turf – doing whatever was necessary.

Over the next few years, Silverio’s gang involvements escalated out of control. He participated frequently in violent confrontations with other gangs and the police. As things eventually reached a crescendo – right after his 18th birthday – he was apprehended, tried, and convicted of a felony. Because he didn’t have the required documentation, he was transported back to his home country.

Although he still had family there, his lack of connection and deeply entrenched gangbanger lifestyle left him on the streets, just trying to stay alive. Then he was caught even deeper in the clutches of gangs – adrift between two worlds. Survival was not easy without an education or marketable skills, and lasting solutions were always in short supply. So Silverio simply defaulted to what he had learned on the streets and was stuck doing what he knew best.

In Central America, reports indicate that as many as 100,000 youth are involved in gangs. Crime and violence are reaching epidemic proportions and gang activities are wreaking havoc on the fabric of society and family.

In light of all this, what should we be doing to take the Word to the streets – to the youth who are tightly caught in the grasp of gangs?

Looking at the very beginning of Jesus’ ministry, he speaks about responding to people in extreme situations. He says, “The Spirit of the Lord is upon me, because he has anointed me to proclaim good news to the poor. He has sent me to proclaim liberty to the captives and recovering of sight to the blind, to set at liberty those who are oppressed . . .” (Luke 4:18).

In the Gospel of Luke, chapter 15, Jesus shares three insightful stories about what to do when something or someone is lost. He speaks of a lost sheep, a lost coin, and a lost son.

Jesus tells about the shepherd with 100 sheep who leaves 99 in the open country to search for one that has gone missing. When he finds it, he carries it home on his shoulders – and, when he gets back home, he gathers his friends and neighbors together to celebrate because the one lost sheep is found.

Next he speaks of a woman who has 10 silver coins and loses one of them. She looks everywhere, turning her house upside down and searching from top to bottom, until the coin is found. When she finds the coin, she calls all her friends and neighbors together to celebrate.

Lastly, he describes a man with two sons. The younger one asks for his inheritance, receives it, leaves home, makes a lot of bad choices, and finds himself penniless – feeding pigs and, literally, living with them in the pig pen. Eventually deciding that his father’s servants are better off than he is, he returns home, asking to only be treated like a servant. In stark contrast to the son’s expectations, his father kills a calf, prepares a feast, places a robe on him, and puts a ring on his finger and shoes on his feet. There is joy and celebration in this father’s heart because his son who was lost, and even feared dead, is alive and back home once again.

In each of these three “lost” stories, there is joy and celebration because what was lost is found: first a sheep; then a coin; and, finally, a beloved son. Jesus shares about the joy and celebration that takes place among the angels in heaven – and, more importantly, in the heart of the Father – when just one sinner repents.

Not long ago, a ministry partner took the Book of Proverbs and recorded a “rap” version of it in Spanish. Faith Comes By Hearing was then asked to make it available for those who are caught between worlds, searching for purpose and meaning in their lives. The good news is that the Word is now being taken to the streets – in the language and style that resonates with the hearts there – so none will be without hope and not even one will have a reason to be lost.

Let’s rejoice and pray, as this street-style version of God’s Word goes out, that many young people will find Jesus to be “the way, the truth, and the life.”


“We thank God for His provision, which allows us to give the Gospel of Jesus Christ to those who have not yet heard.”