Bible Blog › What We Do › Proclaiming the Good News 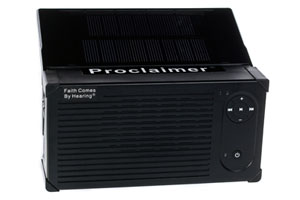 The Proclaimer digital player is preloaded with an Audio Bible recording (usually a New Testament) for the one purpose of proclaiming the Good News of Jesus Christ to the nations.

This amazing tool was developed as a playback device for poor and illiterate people lacking the resources to receive God’s Word. With them in mind, it was developed with many features: 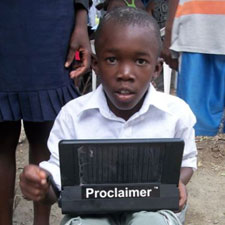 Because the inspiration for this device came during three days of fasting and prayer by our entire staff, we consider the Proclaimer to be a gift from God. This tough little digital player is completely dedicated to proclaiming God’s Word in the heart language of its listeners – just like our entire ministry!

For more information about the various Proclaimer models and available languages, please call (800) 545-6552 to speak with Customer Service. You can also download an operating manual (PDF with English, Spanish, and French instructions for the M2 model, shown above) or view the basic instructional video on YouTube.

Image 2: A young boy in Haiti clings to the spiritually uplifting Proclaimer following the devastating earthquake on January 12, 2010. Numerous partners, individuals, and missionaries involved with relief efforts added more than 3,000 Haitian Creole Proclaimers (in total) to their inventory to bring hope and comfort to the people within the first few months.


“Oh, my brothers, sisters – please come! Come and listen to the Word of God.”