Bible Blog › The Fruit of What We Do › A Faithful Servant 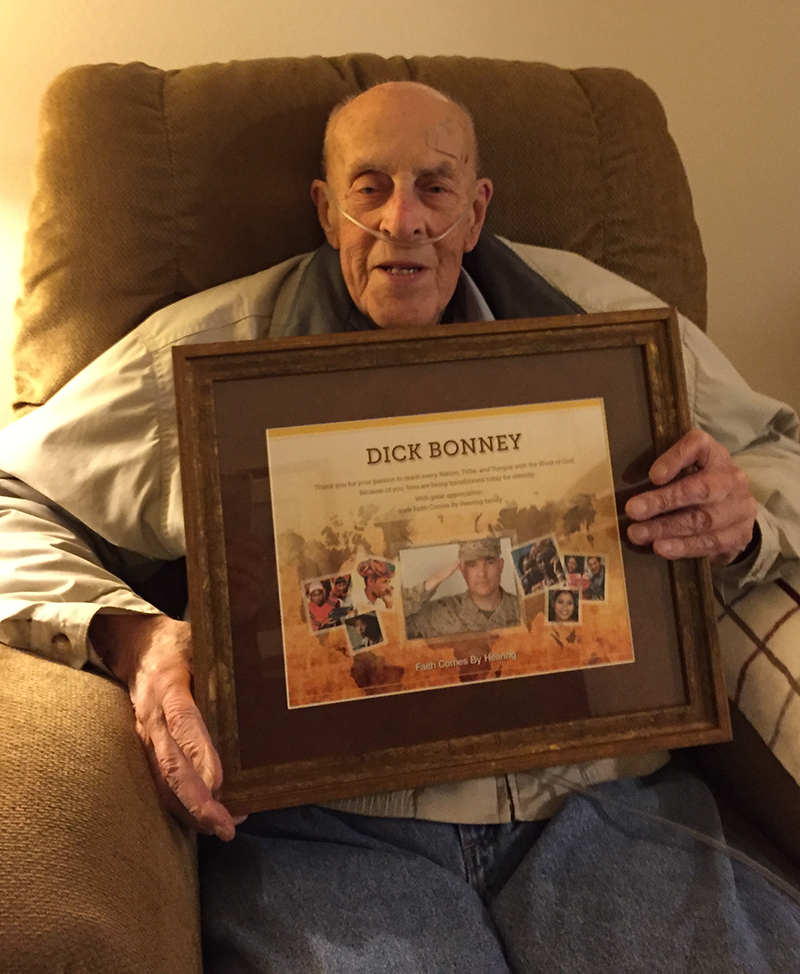 What does it look like to impact 2,199 military service members and 89,113 individuals around the world with the Word of God?

Dick has been a long-time supporter of Faith Comes By Hearing. For many years, he and his wife Bertha would travel from their home in Montrose, CO to Albuquerque, NM to visit the ministry. As they toured around the building, they learned about the latest technology and programs being utilized to help reach every person on Earth with the Word of God in the language and format most useful to them. Dick and his bride were a dynamic duo supporting the ministry and serving in the Bible cause.

Then something happened that rocked their comfy little world. During a visit to Albuquerque in the fall of 2012, Bertha had a stroke. Their Faith Comes By Hearing ministry “family” gathered around them, helped get Bertha into a hospice home, and supported Dick. Seven heartbreaking days later, Bertha graduated from this Earth and advanced into her Heavenly home.

Her husband of more than half a century was devastated.

For the next several years, Dick would struggle with why God was keeping him on this side of Heaven. His FCBH family did their best to encourage him—as long as he was waking up each day, God had something for him to do. Dick has been an amazing ambassador for the ministry—regularly ordering Audio Bibles to pass out to others and sharing about the ministry as the Lord provided opportunities. He continued to do this. He also continued giving on a monthly basis.

At one point, he decided there was a specific amount of money that he wanted to give to the ministry in his lifetime. Every few months he would call to ask how much further he had to go to reach his goal.

Then, again, his world shifted.

Several months ago, one of Dick’s friends called the ministry with the following update: “Dick has had a fall and had to be moved into a nursing home. He is no longer allowed to drive [a huge blow to this career over-the-road truck driver] and he will no longer be able to give to FCBH”—an even bigger blow to this career Gospel-sharer.

Upon hearing this news and knowing how disappointing that would be to him, Dick’s FCBH family stepped into action. The leadership of the ministry made an “offer” to employees to participate in fulfilling Dick’s goal—he was just five thousand dollars shy of completing it. Two weeks later, I had the pleasure of calling Dick to let him know that he had surpassed his goal by two thousand dollars! About two months later, I paid a visit to Dick to let him know just how many people he had been able to impact with the Word of God during his lifetime.

Faith Comes By Hearing is more than a parachurch ministry that seeks to fulfill the command of the Great Commission by providing God’s Word to every nation, tribe, and tongue in a language and format that people can understand. It is a living, breathing representation of the Body of Christ doing day-to-day life together. Working alongside donors, ministry partners, and even co-workers to be the hands, feet, and voice of Jesus to a hurting world—whether to people in a village in Africa who may be hearing God speak for the very first time or to one man living in a small town in Colorado just wondering if his life matters.


And entering the tomb, they saw a young man sitting on the right side, dressed in a white robe, and they were alarmed. And he said to them, “Do not be alarmed. You seek Jesus of Nazareth, who was crucified. He has risen; he is not here.”